The SPP Adopted the Suggestions Got in “Cloud” Audit, NPC Received Reply within One Day

Summary:"A little surprised, and very touched." On May 27th, Nie Pengju, the representative of the National People's Congress and the chairman of Hunan Keli Motor Group Co., Ltd., received a letter... 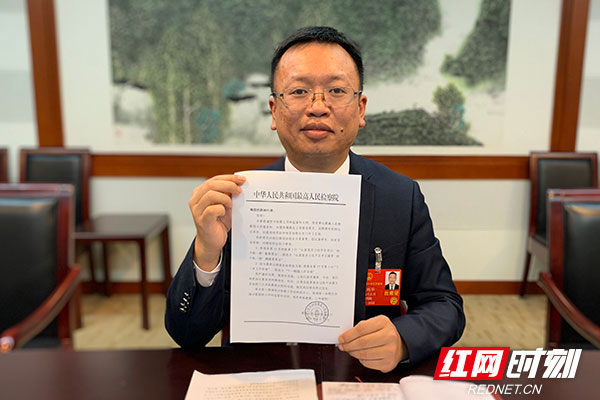 "A little surprised, and very touched." On May 27th, Nie Pengju, the representative of the National People's Congress and the chairman of Hunan Keli Motor Group Co., Ltd., received a letter of thanks from the Supreme People's Procuratorate(SPP).

The afternoon before that day, Nie Pengju put forward his own opinions when the Hunan delegation reviewed the work report of the "the SPC and the SPP" in groups. Unexpectedly, his opinion was immediately recorded by the staff of the Fifth Prosecutor's Office of the Supreme People's Procuratorate(SPP) who was remotely participating it on the “Cloud” . And he immediately feed back to the SPP Party Group. The SPP Party Group attached great importance to it and immediately called the staff of the General Office of the state council to draft the report and relevant departments to study it. This morning he replied to Nie Pengju--Your opinion is very important for us to revise the report. After careful study, it was decided to adopt it completely.

"I put forward an opinion and within one day, I got a response telling me that it has been adopted, how efficient!" Nie Pengju said, this red-headed letterhead from the SPP fully embodies the people-centered concept of prosecution work in the new era .

In fact, it was not the first time Nie Pengju feel the positive feedback from the SPP. During the NPC and CPPCC sessions of the National Congress in 2019, he made suggestions on the work report of the SPP and asked for relevant charts and graphs to be attached to the report, "since many representatives have not been engaged in procuratorial work, showing them in charts and tables can make the content more vivid and vivid," he said.

This year, he found that a number of charts and tables appeared in the report to make it easier to understand.

In addition, in this year's report, Nie Pengju also felt many innovations from the SPP. For example, the smart procuratorate and big data platform embody scientific and technological innovation; Another example, in the “evaluation index for the first development of the case quality by the procuratorate”, “case-to-case ratio” was launched as the sole “core index”, reflecting the system Innovation. "The dual energy drive of technological innovation and institutional innovation has greatly improved judicial efficiency and credibility." Nie Pengju said, "This year's report seeks truth from facts and responds to concerns. I fully agree."