At the ceremony, Chairman of the Group Nie Pengju extended his congratulation to the official opening of Shenzhen Keli Intelligent Control Technology Co., Ltd. and made a speech. He said, we should do a follower first, to learn from the industry excellent enterprises; secondly, we will strive to successfully list Shenzhen Keli Intelligent Control Technology Co., Ltd. in 2025. At the same time, we should spare no effort to cultivate talents and build a broad platform for everyone to realize their ideals and aspirations, and try to become the Chinese national brand in the field of electrical machinery. 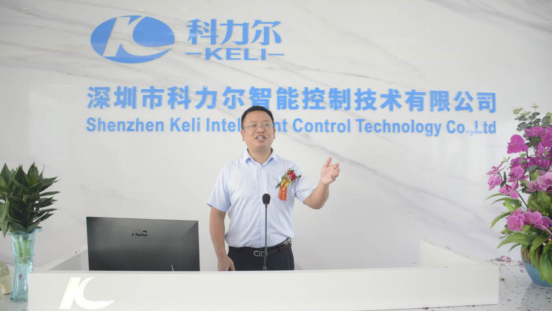 Chairman hoped that everyone regard themselves as striver and adhere to Company’s code of conduct which is “keep promised, result oriented, never give up”.  He hoped that everyone could exercise themselves in their posts and finally make things complete. Catch up with others and become the no.1 in China and even the world.

After more than 20 years of development and continuous optimization of internal mechanism, Keli Motor Group has continuously achieved improvement in business performance, accumulated rich experience in research and development, sales and production, and has a wide range of customer groups.
This year, the establishment of several new companies has demonstrated the strong strength of Keli Motor Group. The inauguration of Shenzhen Keli Intelligent Control Technology Co., LTD also means that the development of Keli Motor Group has stepped into a new level and open up a new areas.

Finally, we take a group photo together, let the photo retain the beautiful moment, record the joy. In the applause and cheers, the opening ceremony activities successfully ended.